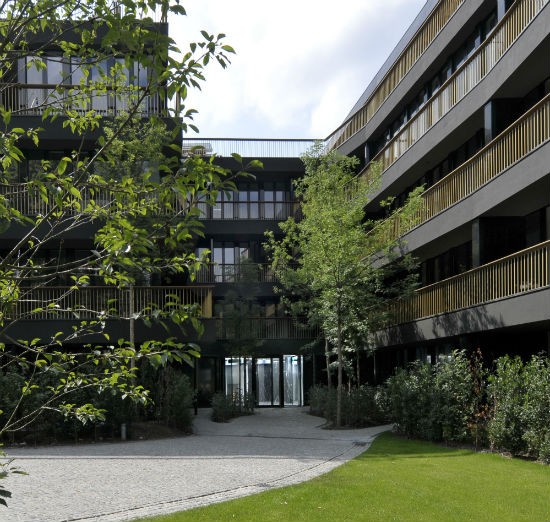 “Architecture is a way of getting noticed without trying to draw attention.” THE DIENER & DIENER ARCHITECTS The exceptional size of the building and its external appearance was a unique context for me. The large depth of the structure – a former office building – enabled us to create particularly spacious new homes. This was how we decided, fairly quickly, to build apartments that were both vast and intimate, while preserving the high quality of the existing building. The intense presence of the park is also a fundamental asset for the project, as is its location on the avenue Hamoir, a well-known address in Brussels, so we were able to make it distinctive. Perched on a hill, the building’s presence interacts magnificently with the surrounding landscape, which stretches as far as the eye can see. This makes the transition between interior and exterior very smooth, almost fluid. In my view, a structure doesn’t need to steal the show. The art is to get noticed without trying to draw attention. THE ELEGANCE OF THE FORMS Roger Diener is the brains behind Diener & Diener, a firm of architects based in Basel, Switzerland. Highly talented, he brings his own personal architectural vision to every project, with consistent attention to scale: exploring the urban landscape and its ramifications brings him to an analysis of the finest details of the build. Often discreet and unostentatious, his projects are characterised by the elegance of their forms. “The private park was a hidden gem. We restored its splendour.” THE LANDSCAPE ARCHITECT GÜNTHER VOGT When we saw the Parc du Hamoir for the first time, with its timeless tranquillity, we started by working out its different strata over time. Only people who take the trouble to conduct this process meticulously can appreciate the intrinsic qualities of the land. In this case, the park itself is much older than the building upon it. The many splendid trees and the overall spatial concept date back to the 19th century, when the park was designed. All of the paths were added later. After much thought, we decided to go back to the oldest level: the existing trees provide balance between the architecture and the open space. We kept them as the ‘spine’ of the park. They form a natural connection with the terraces, where wood is given pride of place. So the old wood will interact with the new wood. LOVE OF THE PROFESSION After numerous national and international collaborations with renowned architects, Günther Vogt started his own landscape architecture company in 2000. As he sums it up himself, his approach is based on the intersection of three elements: nature, structure and technology. While many of his contemporaries make radical changes to green spaces, Vogt favours an evolution of the landscape, seeking to enhance the traces of its history. He always works with a multidisciplinary team, which may include specialists in horticulture, botany or art history. “This project is prestigious. And nothing like it has ever been offered in Brussels.” THE PARC DU HAMOIR It is a project initiated and implemented by Project², a property development company based in Antwerp. It is the latest in a series of major residential developments produced in collaboration with Europe’s leading architectural talents – the trademark of Project². Alon Amar, Managing Director of Project² We have a firm vision of our profession. Our aim is simply to glorify the city, by elevating the architectural and cultural value of the structures we build. Our civic responsibility as a promoter and the formal content of our projects are just as important as the high level of comfort in the apartments. This is the only way to make the residents’ lives an adventure for their senses, while additionally guaranteeing a sound investment for the owners. We worked out the specifics of this project in depth. We wanted to go beyond superficial prestige or elegance, which are all too often the main considerations in Brussels, and give the residents spectacular interiors as well, which they can enjoy on a daily basis. If you sum up the highlights, namely the historic beauty of the private park, signature of internationally renowned architect Roger Diener, bright, luxurious spaces and the security on the site, it’s clear that nothing like it has ever been offered in Brussels!”